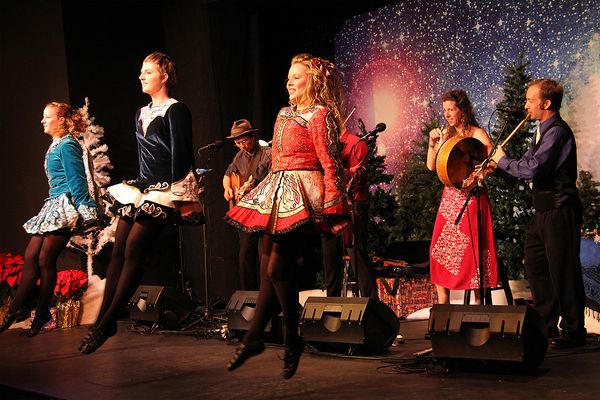 Again in 2018, Molly's Revenge with special guest vocalists and Irish dancers will present Winterdance, an evening of music, song and dance associated with the festive season. The performance will include Christmas songs both old and new, all played with a Celtic twist, and something new for our regulars.

The core of the Winterdance show is the dynamic Celtic trio called Molly's Revenge. This year they will be joined by guest vocalists Christa Burch and Amelia Hogan, along with Irish dancers.  As always, this 13th Annual Celtic Christmas Celebration will capture the traditional spirit of the season and warm the hearts of all who attend.

John Weed is a classically-trained violinist who switched to playing Irish fiddle about 20 years ago. John lived in Ireland in 2000 and taught fiddle workshops at the Flowing Tide International Music School in Doonbeg, County Clare. He attended the Frankie Kennedy Winter School in Dunlewey, County Donegal where he has studied with Ciaran O'Maonaigh and Dermot Mcloughlin. In recent years his fiddling has grown to include American, Quebecois, and Swedish fiddle styles.

Guitarist Stuart Mason has been collecting and performing traditional music for over 40 years. He has appeared on stage from Ireland to China performing Celtic, old-time, bluegrass, and his own compositions, which have won awards from the West Coast Songwriters Association. He also leads workshops and classes in traditional music techniques at music festivals and camps.

Guest vocalist Amelia Hogan sings traditional Irish, Scottish, British, American and contemporary folk ballads with lilting grace and subtle power. She transports you with a spell into another time and place, where the banshee wails and lovers embrace. Haunting melodies, stirring passion, and evocative storytelling are what you’ll find with Amelia’s music.

If you've ever seen the Winterdance show, you know how dynamic and compelling the songs of Christa Burch can be. We are looking forward to all this and more from our new vocalist this year. Amelia Hogan sings traditional, Irish, Scottish, British, American and contemporary folk music with lilting grace and subtle power. She transports you with a spell into another time and place, where the beansidhe (banshee) cries and lovers embrace. Haunting melodies, stirring passion, and evocative storytelling are what you’ll find with Amelia’s music. In her words:

"I was born in the state of California in the United States of America—known the world over as The Land of Opportunity. By birth, I was fortunate enough to have been raised in a country of abundance and dreams. However, my story really begins with my ancestors in Ireland, Scotland and Britain more than a hundred years ago. Their languages and cultures were threatened by hardship and politics. They left their homes out of desperation—in search of a better future for themselves and their children. They left their families, their friends and all they knew in hopes of finding a better future in this new place.

"With them they brought the stories, songs, dances and customs that might sustain them, body and mind, through long voyages, poverty, loneliness, lack of hope and the world they came to move through. In America, for many, there did not find much of the opportunity and possibility they had believed they would. They often found themselves in similar straits to the ones they’d left behind.

"I’ll sing to you of the songs of their old ways, their new circumstances and to remind you of where we come from. This is an Irish-American story, and it’s all of ours. Who would speak their story now that they’re gone? It’s ours to tell so that no one forgets what our ancestors worked so hard to afford us. My third album, Transplants: From the Old World to the New, is a solo-directed but collaborative effort produced at El Mundo Bueno Studios. This album features the accompaniment of several leading instrumental talents including Ray Frank, ANANTA, Winter, Deirdre McCarthy, Paddy Keenan and Vince Wolf."