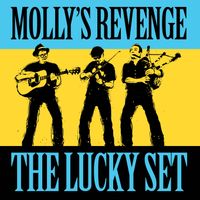 It's done! Our 14th full-length album was released to the world on June 1. Titled The Lucky Set, it includes authentic Celtic tunes, both new and traditional, from Scotland, Ireland, Brittany, Britain, Cape Breton, America, and even Japan. With 13 albums already in the can, the band was able to fund The Lucky Set without any fan fundraising this time. As before, we continue our custom of mixing up rocking Scottish pipe sets with lively irish jigs and reels and beautiful slow pieces. As we did on Lift, we included a composition from English hurdy-gurdy guru Cliff Stapleton, but this time played on Highland bagpipes. Our first 7/8 tune is here as well, composed by Irish banjo star Damien O'Kane. Again we honored our musical heroes Gordon Duncan and Jerry Holland with rocking sets composed by these mighty players. And we found some new sources of inspiration as well: A brand new jig composed by our fiddler's son Tyler, Breton tunes from the repertoire of flautist John Skelton, and a new tune from the pen of our Japanese friend, Hirofumi Nakamura.